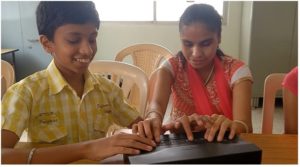 Chetan and Afya reading from Touché .

There are 285 million visually impaired people in the world, of whom 39 million are completely blind. While all of us believe in literacy and in due course, education for the visually blessed, very little thought or concern exists for the visually impaired. Literacy for the blind exists only in the form of Braille. Although technology has made life easier for the blind with the advent of screen readers and text to speech converters, but the same technology is making the only form of literacy available to them, obsolete.

Braille Displays do exist, but they are very expensive.  Some are priced around $3000/- for a small device.  The technology is old, and nothing of significance had been done to produce low cost technology that could be used as a substitute. Embossing Braille is another expensive proposition. With such severe challenges Braille literacy is going extinct. Scribes have become essential as youngsters cannot read/write Braille. We have generations growing up listening to speech on computers and mobile phones but are technically illiterate.  In the west, this problem was recognized and there is a fresh emphasis on Tactile Literacy. Braille became more encompassing and wider in scope and moved from 6 dot to 8 dot.

Touché is a class of device known as a Refreshable Braille Display.  The device has a display area or window where there are hundreds of small pin like projections that can be felt like the embossed Braille dots on paper. These dots change and refresh after a line has been read.  The result is a device that could be likened to a ‘Kindle’ for the blind.  Books in text format can be stored on the device or loaded using USB pen drives.

The device has WIFI, Ethernet, and HDMI ports. Additionally parents , teachers or friends who do not know Braille would be to be able to read the text on a monitor.  With about 10Gb internal memory that can be used for a library, it is estimated that between 30000 and 50000 books or documents could be easily stored on each device. Additionally there is the USB external drive option with 4 USB ports on each device. The device is an E-Reader at present but we plan to include a dedicated Braille keyboard / writing or note taking option soon.

Touchétech Labs Pvt Ltd is the entity created by Paul D’souza, an inventor who is  dedicating his life to solving problems that need attention. His wide range of inventions and designs have provided solutions to various problems and aspects of life ranging from clocks, gherkins sorting, software and now, the blind.

Touché has been entered in the National Geographic ‘Shaping the future’ contest where it won an award. This led to various prototypes and  patent applications. One of the first working prototypes was demonstrated successfully by our 100% Visually impaired friend Ms.Chandana Chandrashekar at Bangalore’s first Mini Maker Faire in October 2015.    https://diyhacking.com/best-maker-projects-maker-faire/

At the same event, we met and eventually  collaborated with a young team of engineers from Sapient Razorfish           ( http://www.touche.world ) to help us with product development.  This collaboration with Sapient Razorfish helped in prototype development and Alpha testing which has brought this device very close to the the completed product we envisaged.   We have also upgraded from the 6 dot cell to the 8 dot cell which is the currently accepted competitive Braille standard internationally. In October of 2016, we won the prestigious  ‘Innovation for good’ award for Touché  from Lund University (Sweden).   http://www.sasnet.lu.se/media-project/innovationforgood-2016

We have conducted several tests with actual users ranging from Braille teachers, students, families of the blind and so on, to find that our device brings immense joy and satisfaction to the end users. We have collated feedback from our extensive testing and hands on usage, and are working towards the same to ensure full scale production within the coming months.

Look for the channel ‘pgdsouza’  on YOUTUBE  for more.

Alpha tests were done with various friends an individuals and some institutions.

Blind Schools where testing of the device was undertaken:

The Deepa Academy For the Differently Abled

Staff and students at Deepa Academy for the Blind testing devices.

Testing at JyothiSeva School for the blind testing Touché.  (Chetan and Afya–  both blind in class 8)